Drooodle Cards are a spoof of Pokémon Cards that come in 5 cards per pack that was made by fellow drooodlers which feature certain OCs on them.

Drooodle Card Packs are rectangular shaped cards in similar fashion to Pokemon Cards. A typical drooodle card pack will come in a pack which has the drooodle 'd' on it and text stating "OC Card Pack" or anything similar to that fashion.

The cards themselves will come in a variety of colors depending on the rarity of their type, and have the typical drooodle 'd' on it and have the contents of the OC featured on the back.

The difference between the two packs is that a RCP will always hold 2 common cards and 1 uncommon card, the last 2 being random. MCPs will always contain random cards, i.e; 1 Golden, 2 Greens, 2 Reds.

The cards themselves will contain an OC of any drooodler, the higher rarity the card, the more damage will be dealt and have overall better stats.

In order from rarest to least rare:

bootleg card-packs are card-packs where instead of traditionally having others make cards for you, you make your own cards mid-battle or before battle. This act is frowned upon but is understandable for newcomers to the game 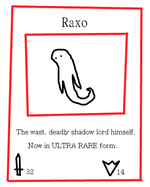